Experience the magical land and seascapes of the Antarctic, the last pristine wilderness of glaciers, penguins, seals, sea birds and icebergs. In the company of Dr Sylvia Earle and her special guests.

Be part of this pivotal Antarctic summit to save our environment for future generations.

online application
“February 2023 will be a moment in time of a gathering of great minds for commitments to resolve what it takes, to move from where we are now to get to a better future. This can be Your Legacy; you can help change the current course from a catastrophic outcome to a healthy, habitable planet. Please do this for the next generation, for the future of humanity.”
Dr. Sylvia Earle
oceanographer, marine biologist and explorer 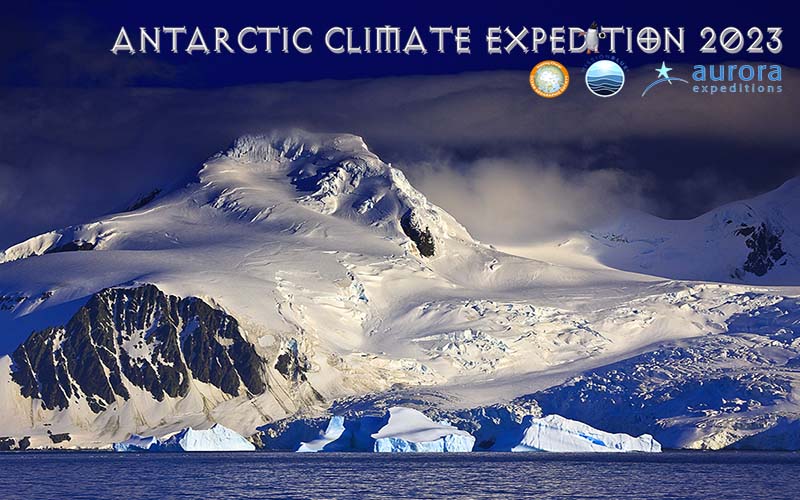 Ocean Geographic, Aurora Expeditions and Mission Blue invite thought leaders in the fields of science, art, education, and economics, alongside inquisitive teenagers and corporate executives, to participate in an expedition to Antarctica with Dr Sylvia Earle. The principal expedition team for this most important climate summit will be comprised of conservationists, celebrities, and ocean luminaries.

The master plan of the Antarctic Climate Expedition is to bring about public and government awareness of the importance and the splendour of the Antarctic, and to address the warming climate and loss of ice in the southern polar region as a direct threat to the future of human life on this planet. The purpose of this expedition is to confront the consequences and develop creative strategies for everyone to radically reduce carbon emissions.

As such, the expedition team of ACE represents the voices of everyone across our planet; we are looking for diversity in age, gender, nationalities, culture, skills, and professions. Expedition members will help formulate 23 resolutions to inspire transformative changes for global net-zero emissions by 2050. Each expedition member will contribute pictures, painting, music, prose, poem, essays to the expedition report, book, film, posters, and exhibitions. The narratives and images from this expedition aim to encourage the way people see and understand the Antarctic, enlightenment that will hopefully catalyse a much-needed paradigm shift away from indifference and into action to protect and preserve our natural environment.

You can be part of this pivotal Antarctic summit to save our environment for future generations.

Outcomes of the Expedition

A series of lectures, a feature documentary, exhibitions, a book and importantly, 23 resolutions to stimulate transformative change for net-zero emissions by 2050.

You can be part of the legacy that helps change the current course from a calamitous state to a healthy, habitable planet.

The magical land and seascapes of the Antarctic, the last pristine wilderness of glaciers, penguins, seals, sea birds and icebergs. In the company of Dr Sylvia Earle and her special guests.

The brand-new ship by Aurora Expeditions Australia is named in honour of Dr Sylvia Earle. The purpose-built vessel is designed for expeditions to the most remote places on earth.

Its revolutionary ULSTEIN X-BOW® allows the ship to cross oceans more comfortably and efficiently, and with expansive observation decks. The Sylvia Earle offers the perfect base camp for adventures at the outer limits of human exploration and accommodates an average of 132 expeditioners per voyage within 70 comfortable cabins. The ship also features a modern lecture lounge, a science centre, multiple observation areas, Zodiac launching platforms, a restaurant serving exquisite meals, a gym and wellness centre, Jacuzzis, a mudroom and many other amenities.

The Expedition package compromised from;

Dr Sylvia Earle, a Rolex Testimonee fondly referred to as Her Deepness, is the recipient of more than 100 national and international honours and awards. These include being named Time Magazine’s first Hero of the Planet, a Living Legend by the Library of Congress in 2014, UNEP Champion of the Earth, Glamour Magazine’s 2014 Woman of the Year, member of the Netherlands Order of the Golden Ark, and winner of 2009 TED Prize, the Walter Cronkite Award, the 1996 Explorers Club Medal, the Royal Geographic Society 2011 Patron’s Medal and the National Geographic 2013 Hubbard Medal.

Sylvia was the first woman to become chief scientist of the US National Oceanic and Atmospheric Administration and is currently President and Chairperson of Mission Blue and the Sylvia Earle Alliance.

Known as the mother of our world’s oceans, she is an oceanographer, explorer, author and lecturer with an insatiable passion for underwater exploration and marine conservation. Sylvia still currently holds the record for a solo dive to an astonishing depth of 1,005 metres into the deep sea.