Martha is a graduate of the University of New Hampshire in Earth Science and Oceanography where she became a research diver with the Jackson Marine Lab diving off the New England coast, and ice diving in the lakes. She was hired as a diver by the California State Fish and Game Department to study kelp beds and marine terraces in Southern California and received further training by Navy Seals on Catalina Island. She went on to become a Staff Research Associate 5 for the Shore Processes and Hydraulics Lab at the Scripps Institution of Oceanography at UCSD installing wave and current meters, and conducting beach profiles to study how nearshore processes set sediment in motion and has published papers on this topic, earning a graduate degree in Geology from San Diego State University. She serves in the United States Coast Guard Auxiliary in San Diego Harbour.

She enjoys promoting the work of others and collaborating on new and engaging ways to increase the public’s understanding of the wonders and fragility of our planet in entertaining media formats. 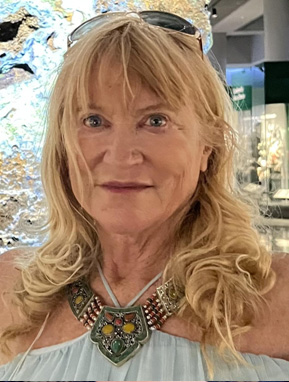