4. 2012 was among the top 10 years on record for global land and surface temperature since modern data collection began. 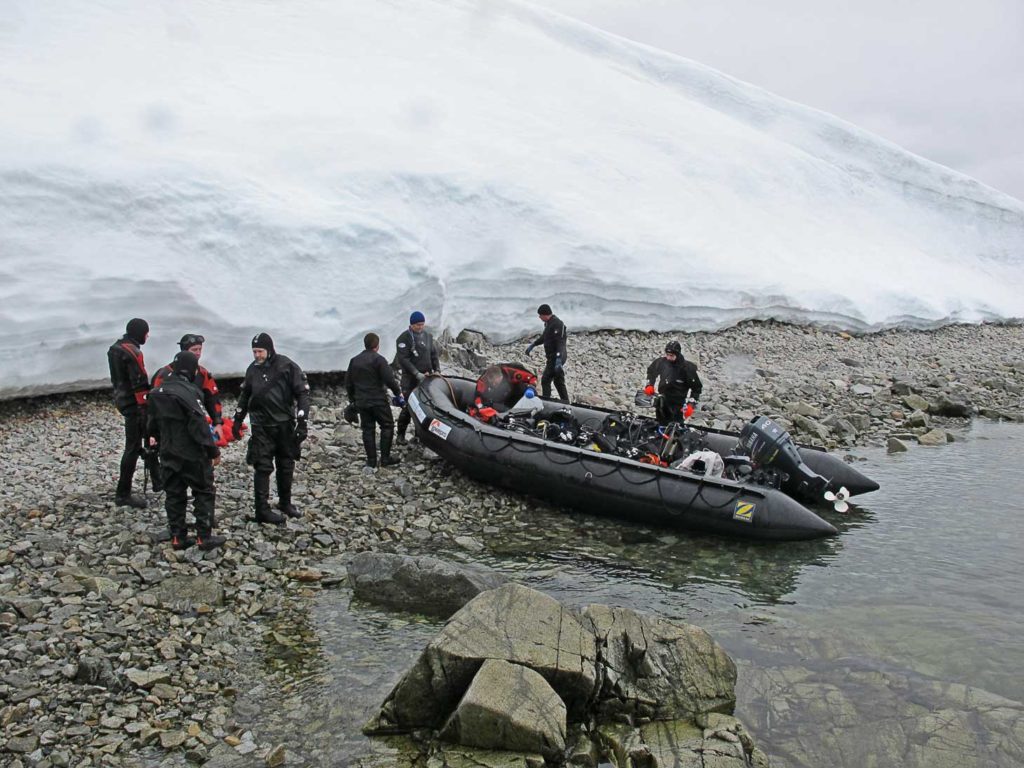 5. Surface temperatures in the Arctic are increasing at a rate about two times faster than the rest of the world.

8. Evidence from lake sediments, tree-rings and ice cores suggest that temperatures in recent decades have been higher than at any time in the past 2,000 years.

9. The ice that forms over the Arctic sea is shrinking so rapidly that it is predicted to melt away by the summer of 2015.

10. In the Arctic, precipitation is increasingly falling as rain during the winter months.

Many globally significant populations of animals can be found in the Arctic, including over half of the world’s shorebird species, 80% of goose populations, several million reindeer, beluga whales and narwhals. Sea ice is an important element in the Arctic ecosystem for many species, from bacteria and unicellular algae on the underside of the ice to large mammals such as polar bears and ringed seals.

Recent Arctic Council assessment found that the impact of climate change on marine animals and birds is likely to be “profound.” There are now fewer polar bears because they are finding it more difficult to hunt for food in the southern section of their ranges. Walruses are also being forced to hunt in deeper waters, where access to food is much more difficult. Herds of reindeer have declined by one-third since the 1990s as their access to food sources, breeding grounds, and historic migration routes have been altered. Sea ice is akin to an upside down coral reef; over 1000 species of ice algae living in direct association with arctic sea ice require its presence for survival. Ice algae along with some species of sub-ice phytoplankton are essential food sources for many animals and their survival and proliferation are paramount to a healthy food web. Copepods, amphipods, and other lipid-rich herbivorous zooplankton are uniquely adapted to eat these primary producers. All of these co-dependent species will be adversely affected by the loss of sea ice.

As arctic sea ice gets thinner and scarcer, the multitude of creatures that depend upon its existence and stability for their well-being are facing increasing jeopardy. Primary producers use photosynthesis to convert light into usable energy in the form of proteins, carbohydrates, and fats, and are then consumed by herbivorous zooplankton such as amphipods and copepods, which are in turn eaten by larger zooplankton, fish, seabirds, and even some marine mammals. The highest level of consumers at the top of the food chain includes animals such as whales, seals and polar bears.

Many species of animals including seabirds, whales, and arctic fishes will have trouble keeping themselves fed without a proliferation of these fatty crustaceans and will suffer as populations of ice-associated zooplankton diminish along with the sea ice. These creatures will all have to travel farther to find less food and will consequently work harder and expend more indispensable energy to feed themselves and their offspring, ultimately burning more calories than they can consume, leading to the demise of many arctic species.

Shrinking sea ice is a major problem for arctic marine mammals not just because their sources of food will diminish, but because these animals are fundamentally reliant on sea ice for many essential aspects of their lives including hunting, reproducing, and raising their young.

The most well-known mammal suffering from the loss of arctic sea ice is the polar bear. Their primary prey items are ice-dependent seals and with the ice thinning and being absent for more of the year, the polar bears’ hunting season has been shortened. This results in thinner bears, declining reproductive rates, and increasing cub mortality rates. It is projected that we will lose two-thirds of the world’s polar bears by 2050

Bowhead whales, belugas, and narwhals will face problems including food shortages due to ice loss, entrapment in shifting ice, and increased predation by orcas expanding their hunting range into the warming arctic waters. Arctic seals and walruses, are already suffering from the troubling effects of habitat loss. Stable sea ice is a crucial component of successful reproduction and pup survival in all arctic seal species. The ice must be solid enough for mothers to haul out on and nurse their young, and for some species such as the ringed seal (Pusa hispida), sufficient snow cover is equally important. Some species build a birth lair by digging a cave into the snow cover on top of the sea ice for thermal insulation and pup protection, and without a proper lair, seal pups will likely die of hypothermia.

Vanishing sea ice is just the beginning of an imminent climate crisis and is an indication that we need to act now in order to prevent further irreparable damage to our planet. We must act together on a global scale to drastically reduce greenhouse gas emissions quickly and permanently. It is not too late to reimagine our future, but our window of opportunity to incite these critical changes is closing rapidly as our arctic sea ice is fast melting!

2.    The oceans play an essential role in regulating global climate and regional temperature, and are crucial for controlling the carbon, oxygen, and water cycles of the planet. The oceans are a vital part of the complex geophysical and biochemical systems that support life on Earth.

3.    The exchanges of cold and warm water that take place in the Antarctic’s Southern Ocean and the seas of the Arctic are key drivers of ocean thermohaline circulation around the globe, and thus play a fundamental role in controlling the world’s climate.

4.    There is strong evidence that, due to human impacts on our atmosphere stemming from the emission of greenhouse gases, significant changes are taking place in the chemical composition of the oceans. Those changes are affecting the oceans’ pH levels and productivity, and are impairing the ability of ocean life to survive and thrive. These issues are vital signs, telling us that our planet is in distress.

5.    The ocean harbours a great diversity of life, with complex interactions between species and their environment. Productivity of ocean life affects global climate through the carbon cycle and provides important protein to the world food supply.

6.    If each of us accepts personal responsibility for becoming informed about climate change and ocean change issues, and for taking appropriate individual action to address the problems involved, collectively we will be able to achieve the results necessary to restore the health of our planet.

This Manifesto affirms that the Elysium Artists for the Arctic Epic Expedition is more than just an exploration event. It is a commitment by the team of explorers to a greater goal beyond the adrenalin rush of a challenging adventure. This Elysium Epic Expedition is a continuation of our ongoing commitment to inspire and enlighten the general public and government decision-makers around the world, and to motivate everyone to take essential actions to restore the health of our planet. Elysium Epic’s Manifesto – A Call for a Change in Attitude Toward Our Oceans.

The Climate Change Paradigm: Atmosphere to Ocean to Climate

The Elysium Artists for the Arcitc mission stems from its explorers’ shared understanding that climate change is intimately related to ocean change. . The oceans play an essential role in regulating global climate and regional temperature, and are crucial for controlling the carbon, oxygen, and water cycles of the planet. The oceans are a vital part of the complex geophysical and biochemical systems that support life on Earth . For example, the exchanges of cold and warm water that take place in the Antarctic’s Southern Ocean and the seas of the Arctic are key drivers of thermohaline circulation throughout all the oceans across the globe, and thermohaline circulation in turn plays a fundamental role in controlling the world’s climate. Another example: there is strong evidence that, due to impacts on our atmosphere stemming from the emission of greenhouse gases, significant changes are taking place in the chemical composition of the oceans. Those changes are affecting the oceans’ pH levels and productivity, and are impairing the ability of ocean life to survive and thrive. Impacts on the well-being of ocean life are beginning to affect other forms of life as well. These issues are vital signs, telling us that our planet is in distress.

Human impact on the ocean is increasing every year with global warming and acidification reducing ocean productivity, overdevelopment and pollution contaminating the sea, and an increasing demand for food causing over-harvesting of the world’s fisheries. Addressing these issues requires a combination of exploration and quantitative analysis to understand the underlying processes controlling diversity and productivity of marine life. Such knowledge is essential to allow us to better protect ocean life and thereby protect ourselves.

The Strategy
The members of the Elysium Arctic expedition and all affiliated agents and organizations will embark on a systematic global awareness campaign, using a variety of publications and activities, to increase public and governmental understanding of climate change and ocean change in the Arctic. A crucial goal is to explain that ocean change is a key element of climate change, and addressing the serious changes occurring in our oceans must be a part of addressing climate change if we are going to achieve the most beneficial outcomes.

Saving the Ocean’s Barometers
Dolphins, sharks, and whales are crucial umbrella species in ocean ecosystems, and are therefore barometers of our ocean’s health. By preserving the existence of these creatures in the oceans, we will be preserving an essential strand in the web of life on Earth. The indiscriminate culling of these magnificent and important animals must cease, and no effort should be spared to achieve that result.

Protecting Ocean Health
Ocean life influences the chemical composition of the sea, thereby impacting ocean-atmosphere gas exchange and global climate. Human induced ocean warming and acidification are changing the balance between ocean biology and its physical and chemical environment. It is incumbent on us to explore and quantify ocean life and its environment, from plankton through top predators, in order to understand and protect the health of this vital component of our planet’s biosphere. Studying key groups of animals like zooplankton (e.g. krill, copepods, salps), and higher predators (e.g. dolphins, sharks, whales, seals and seabirds) can help us keep our finger on the pulse of ocean life.

Personal Responsibility
The Elysium Arctic explorers are each committed to using their expertise to increase worldwide understanding of ocean change as a key element of climate change. The explorers have taken on the personal responsibility of achieving that goal by following in the wake of Shackleton’s epic 20th century expedition, and now by expanding upon the Shackleton Antarctic mission to create an unparalleled artistic portrait and crucial scientific index of the current conditions in the Arctic as climate change begins to take a toll on the region. The Elysium Arctic explorers are dedicated to the notion that preservation of life on Earth as we know it depends on each individual accepting personal responsibility for educating him or herself about climate change issues and for reducing his or her own carbon footprint.

For Future Generations
The Elysium Arctic explorers will strive to create a comprehensive and compelling artistic portrait of the Arctic, and document its current ecological status scientifically. The explorers hope the fruits of their efforts will bring the plight of this crucial region to the attention of the world, inspire action to fight climate change, yield vital benchmark data for measuring the future effects of Arctic warming, and will comprise a magnificent collection of sights, sounds, and information to be treasured by future generations.