The Elysium Artists for the Arctic Project is inspired by the work of Sir Hubert Wilkins, the last explorer of the Great Age of Polar Exploration, the first to assert that the Polar Regions controlled the climate on earth. Twenty-four years before the first man went to space, he suggested that we really should be able to put ourselves outside earth and study it as a whole. Even earlier, he had described the view of the earth from space with uncanny precision: “Gradually, I could imagine myself apart from this earth situated somewhere out in space watching whirling winds sweep from the poles to the equator then heated by the sun’s rays, they swept upwards to the stratosphere. Then as they gradually cooled they would sink toward the poles and reach the earth, only to be swept furiously once more toward the equator and upward again. Visualising the atmosphere, imagining it to be in colour, I see the earth as a solid bodied sphere with two circulating systems of atmosphere circulating about its surface. The centre of its air mass was at the polar areas.” This was the view of earth as first seen by astronauts years later.

By 2005, the crucial role the poles play in regulating our planet’s weather had become clearer than ever before. As we learned more about the serious consequences of global warming, changes at the poles have provided us with warnings many are reluctant to heed. Without doubt, the world’s climate is changing and humans are definitely implicated.  While the giant ice shelves are shattering in the south, glaciers are fast vanishing from Greenland and Iceland in the north. In the Antarctic, scientists have measured a 20-mile high tornado of swirling winds around the continent. As this vortex spins faster under the warming effect of the ozone hole and greenhouse gases, it may be sucking away the storms that bring rain to Southern Australia. Part of Australia now faces the prospect of permanent drought, and rainfall to its southern cities has already declined drastically. 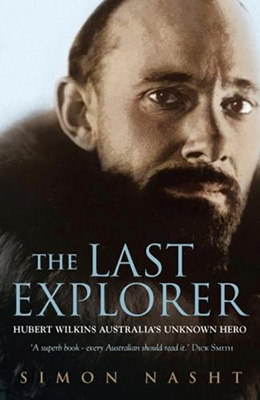 In the north, scientists recently confirmed that the Arctic temperatures are warming at twice the rate of lower latitudes, making the area one of the most rapidly changing regions on Earth. Arctic ecosystems are facing radical alteration. Peter Wadhams, a professor of ocean physics at the University of Cambridge, warns that Arctic sea ice could completely melt away during the summer of 2015, destroying the natural habitat of many animals. Australia in 2013 marked its hottest day, month, season, and it was the hottest calendar year ever recorded! “We’re smashing all records,” said Andy Pitman, director of the ARC Centre of Excellence for Climate System Science at the University of NSW.” National maximums were 3.41 degrees over the norm, with South Australia’s out by 5.39 degrees and NSW’s by 4.68! As the consequences of global warming become apparent, Wilkin’s obsession with polar meteorology looks increasingly like the work of a visionary.

As a child, George experienced the devastation caused by drought and developed an interest in climatic phenomena. Reared as a Methodist, he studied engineering part time at the South Australian School of Mines and Industries, then pursued interests in photography and cinematography in Adelaide and Sydney. In 1908 he sailed for England to work for the Gaumont Film Co.

As a newspaper reporter and cameraman, Wilkins visited different countries; he also learned to fly and experimented with aerial photography. As a war correspondent and photographer, in 1912 he covered the fighting between the Turks and Bulgarians.

From 1913 to 1916 he was second-in-command on Vilhjalmur Stefansson’s Canadian Arctic expedition: Wilkins became adept in the art of survival in polar regions, added to his scientific knowledge and conceived a plan to improve weather forecasting by establishing permanent stations at the poles.

Returning to Australia, on 1 May 1917 he was commissioned as second lieutenant in the Australian Imperial Force (Australian Flying Corps). By August he had been transferred to the general list and was at I Anzac Corps headquarters on the Western Front. Appointed official photographer in April 1918, he was tasked with providing ‘an accurate and complete record of the fighting and other activities of the A.I.F.’ as a counterpart to Captain J. F. Hurley’s propaganda work. In June Wilkins was awarded the Military Cross ‘for bringing in some wounded men’. With Hurley’s departure, he was promoted captain on 11 July and took charge of No.3 (Photographic) Sub-section of the Australian War Records unit. His routine was to visit the front line for part of each day that troops were engaged in combat and periodically to accompany infantry assaults. During the battle of the Hindenburg line, on 29 September he organized a group of American soldiers who had lost their officers in an enemy attack and directed operations until support arrived. Awarded a Bar to his M.C., he was also mentioned in dispatches. The A.I.F. published his edited Australian War Photographs: A Pictorial Record from November 1917 to the End of the War (London, 1918).

In January 1919, as photographer, Wilkins joined Charles Bean’s mission to reconstruct Australia’s part in the Gallipoli Peninsula campaign. He entered the England to Australia air race that year, but his aircraft, a Blackburn Kangaroo, experienced engine failure and crash-landed in Crete; he arrived in Australia by sea in July 1920 and his A.I.F. appointment terminated on 7 September. Engaging in further polar exploration, in 1920-21 he made his first visit to the Antarctic, accompanying J. L. Cope on his unsuccessful voyage to Graham Land. Wilkins next took part in Sir Ernest Shackleton’s Quest expedition of 1921-22 on which he made ornithological observations.

While in the Soviet Union in 1922-23 surveying and filming the effects of famine, he was asked by the trustees of the British Museum to proceed to tropical Australia and collect specimens of the rarer native fauna, principally mammals. Wilkins’s book, Undiscovered Australia (New York, 1929), showed the extent and quality of his work over two and a half years from 1923; in addition to mammals, the collections included plants, birds, insects, fish, minerals, fossils and Aboriginal artefacts. When a projected Antarctic expedition failed through lack of funds in 1926, he began a programme of Arctic exploration by air. The enterprise culminated in his great feat of air navigation: in April 1928, with Carl Ben Eielson as pilot, he flew from Point Barrow, Alaska, United States of America, eastward over the Arctic Sea to Spitsbergen (Svalbard), Norway. He was knighted in June, and awarded the Patron’s medal of the Royal Geographical Society of London and the Samuel Finley Breese Morse medal of the American Geographical Society.

His book, Flying the Arctic (New York, 1928), publicized the achievement. On 30 August 1929 in the registry office, Cleveland, Ohio, Wilkins married Suzanne Evans, an Australian-born actress known by her stage name ‘Suzanne Bennett’. Though they were to remain childless, the marriage was a happy one and both parties pursued their own careers.

Sir Hubert had carried out the first aerial explorations of the Antarctic in November 1928 and January 1929. While most of his discoveries were later shown to have been erroneous, his ‘reconnaissance greatly influenced the course of all subsequent exploration in the area’. He visited Antarctica again in 1930 and attempted next year to reach the North Pole by taking a surplus United States Navy submarine, renamed Nautilus, under the pack-ice. Mishaps and mechanical failures caused the venture to be abandoned, amid ridicule of his ideas. Wilkins’s account of the operation appeared in Under the North Pole (New York, 1931). In collaboration with Lincoln Ellsworth, he made four further expeditions (1933-34, 1934-35, 1935-36 and 1938-39) to the Antarctic continent. During 1937 and 1938 he played a major role in the search for the Russian aviator Sigismund Levanevsky who disappeared on a flight from Moscow to Fairbanks, Alaska. In these years Wilkins also advanced techniques of flying by moonlight, made scientific observations and experimented with telepathy. 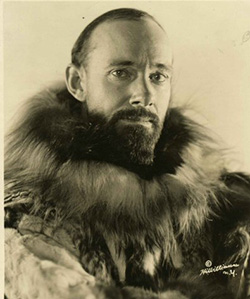 At the outbreak of World War II he offered his services to the British and Australian governments, but was rejected on account of his age. Wilkins nonetheless became involved in a number of missions for United States government agencies, visiting the Middle East, South-East Asia and the Aleutian Islands. From 1942 he was a consultant and geographer with the U.S. Army Quartermaster Corps which sought his advice on rations and equipment suitable for use in conditions of extreme cold. He held other defence-related scientific posts, and served in the U.S. Weather Bureau and the Arctic Institute of North America.

A fellow of the Royal Geographical Society and the Royal Meteorological Society (1923), Wilkins could be dismissive of conventional scientific method. He was primarily a field explorer and pioneer who worked to a clear, long-range plan, based on his conviction of the necessity for a world-wide meteorological organization. Yet, his curiosity drew him irresistibly to new ideas and projects. In 1955 he was granted an honorary D.Sc. by the University of Alaska. Despite his solitary nature, he was a good mixer and companion. Tall and athletic, he had physical drive and courage to match his mental endurance, and he held deep religious convictions.

Wilkins lived to learn in August 1958 of the under-ice transits of the Arctic Sea by the submarines U.S.S. Skate and U.S.S. Nautilus. He died suddenly in his hotel room at Framingham, Massachusetts, on 30 November 1958 and was cremated; four months later his ashes were scattered from the Skate at the North Pole. Lady Wilkins survived him and wrote affectionately of a husband whose only contact with her for extended periods had been through his letters. Her portraits of Wilkins, and those by Vuk Vuchinich, Roland Hinton Perry and James Peter Quinn, were in her possession at the time of his death. Another by Reynolds Mason hangs at the entrance of the Wilkins arctic test-chamber in the Army Quartermaster Research and Engineering Center, Natick, Massachusetts.